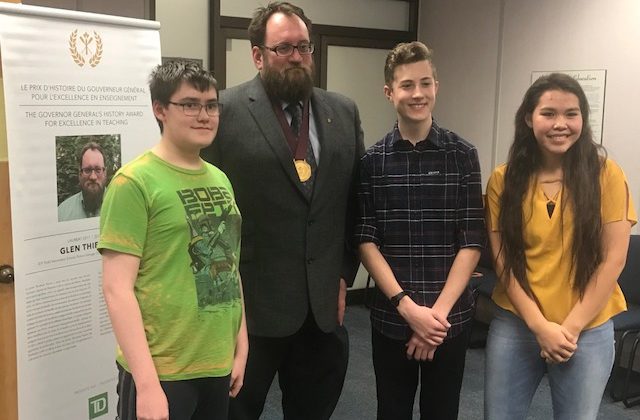 Students from D.P Todd Secondary School presented their heritage projects they did for the Skookum stories at the SD57 board meeting last night(Tuesday)

Tessa Erickson presented the history of her Aboriginal family and the heartache they went through, living in the time of Residential Schools and the 60’s Scoop.

Glen Thielmann is at #sd57 board meeting taking about being honoured for his work on the Skookum Stories and the medal he received from Ottawa pic.twitter.com/8ZA3CuFjLw

She says after learning her Native language Nak’azdi is dying out she wanted to find some way to bring it back.

She applied and was awarded a grant for $50,000 by her band to to create a language app.

“I’m focusing on my own community’s language before I make the app for our community, but branch out to others and really bring back the nation and keep the language strong as it’s starting to die off.”

Erickson says her father helped her with receiving the grant.

Students from D.P Todd Secondary School are telling their stories and what history they found about their own families while participated in the Skookum Stories | #cityofpg #SD57 pic.twitter.com/wmUDZc8yI4

“My dad had asked me if there’s any projects I would like to work on and I said I would like to learn our language. So he put together a letter and sent it to the band and they thought it was a good idea and put me as the youth lead.”

Over the winter Erikcson is going to start working on the language app and will hopefully have it up by the summer.