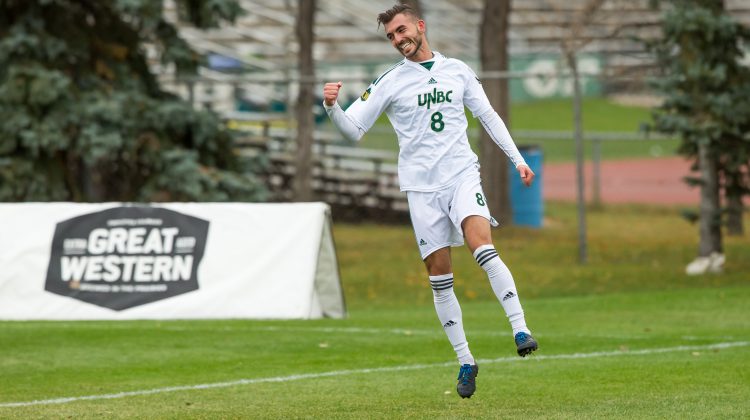 UNBC’S Francesco Bartolillo was named today as the Canada West Third Star of the Week.

The fifth-year midfielder from Calgary tallied twice and added an assist in Sunday’s 3-0 victory over the Saskatchewan Huskies to give him a grand total of 13 goals, one more than the previous record-holder Tofa Fakunle.

They were teammates for four years.

“It’s an honour, considering the calibre of players who are at the top of that list,” said Bartolillo in a team news release.

“Tofa, who is my best friend, is a fantastic player and played a huge role in paving the way for what this program has become. Plus, he actually assisted a handful of my goals during our time here. It’s definitely something really cool to experience.”

The 1-1-2 Timberwolves still have 11 games left in the Canada West season.

The UNBC men will host Lethbridge Friday at 6 PM and Calgary Sunday at Noon.

HISTORY! With two goals in a 3-0 triumph over @HuskieAthletics, our @F_Bartolillo is now the all-time leading goal scorer in @UNBCMSoccer history. He passes longtime TWolf great @TofaFakunle. Congrats, Fran, and thank you for all you do on and off the pitch. #gotwolves pic.twitter.com/NSaf9Rfywr