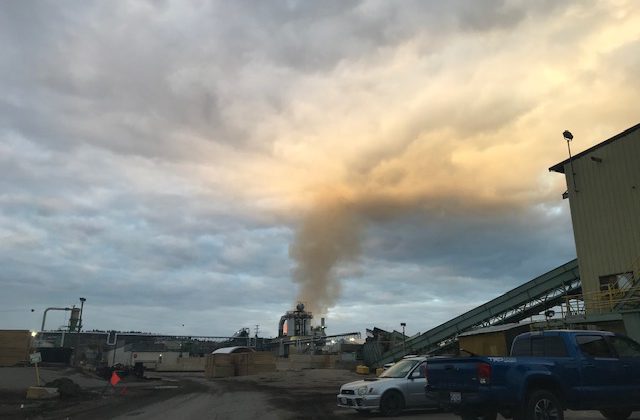 Cloud of smoke rises into the night sky after a pipeline ruptured north of Prince George (Cole Kelly, MyPGNow.com staff)

An update is expected in Prince George later today from two of Canada’s major committees.

In light of Tuesday’s pipeline rupture more than 13-kilometres north of the City, members of the National Energy Board (NEB) and the Transportation Safety Board (TSB) have been deployed.

#NEB inspectors have been deployed to the area to monitor and oversee the company’s response and to determine the impact and extent of the release. No injuries have been reported. More information to be provided as available.

“The recent fire was on the west coast Mainline Loop, which is owned by Enbridge,” says NEB spokesperson Chantal MacLeod.

“So we do have many inspectors that have been deployed to the area near Prince George and they’re working alongside the company and another emergency response partners.”

Chris Krepski with TSB says two of its officials are en route as it’s in the Board’s mandate to respond to Federally regulated projects.

“We will enter the site when it is safe to do so, and then we will examine the pipeline and any related installations; we will also be interviewing witnesses, interviewing those with the company, company officials, and first responders.”

Fortis BC is also asking customers across the province to turn off thermostats to reduce gas and energy use as investigations continue.

We are anticipating decreased energy flow and potential loss of service to some gas customers. We request that all gas customers across BC turn off their thermostats as well as reduce use of all other natural gas appliances. We appreciate your assistance: https://t.co/K0UslaGx7Y

The Enbridge pipeline runs from Chetwynd to the Canada-United States border, serving natural gas to those mainly living in the Lower Mainland and further North.