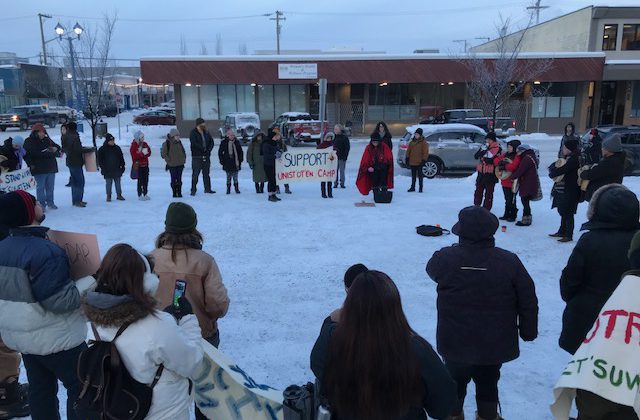 Supporters of the Unist’ot’en and Wet’suwet’en came together this morning at the Prince George Courthouse.

After the Wet’suwet’en Access Point Facebook page called out an “action alert” on January 5th,  groups have mobilized in more than 55 locations internationally to stand in solidarity with the pipeline protesters.

Over a dozen people were arrested yesterday as the Gidimt’en gate was dismantled by RCMP. Today, police are moving on the Unist’ot’en camp to further enforce an injunction against anyone blocking the construction of an LNG pipeline scheduled to begin in the area.

The gathering at the courthouse is two-fold for supporters, as some of those taken in by police yesterday are arriving throughout the day to stand in front of a judge.

Yesterday, members of the RCMP’s Aboriginal Police Liaison met with the Wet’suwet’en Hereditary Chiefs and indicated that specially trained tactical forces will be deployed to forcibly remove Wet’suwet’en people from sovereign Wet’suwet’en territory….