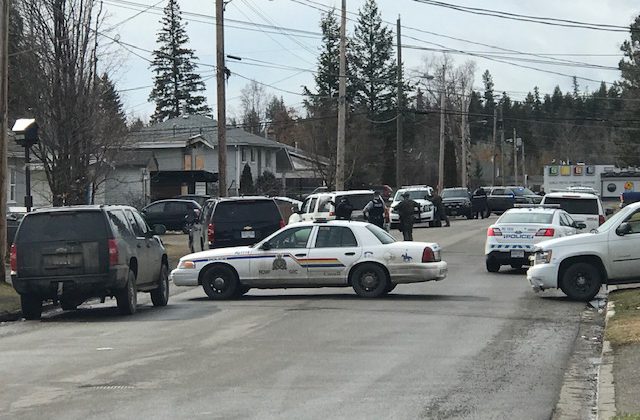 RCMP are in a standoff at the 2100 block of Tamarack St. related to last Friday’s shooting.

Prince George RCMP Corporal Craig Douglass said the emergency response team is on scene and “there are several police resources in that area as part of an ongoing investigation.”

Corporal Craig Douglas makes a statement about the on going police stand off pic.twitter.com/CPrniAd1hU

RCMP are advising the public to avoid the area for the time being.

Last Friday (April 5) police received multiple calls of gunshots on the 2200 block of Quince at 4:15 PM.

One man was shot and taken to the hospital with non-life treating injuring.

Two men were later arrested, and two suspects are still at large.

The RCMP issued a pair of arrest warrants on Tuesday in relation to the shooting on Friday. Kenneth Ricardo Munroe and Eric Vern West were the two adult males named in the news release made by Cpl. Craig Douglass.

Police said the attack was related to the drug trade and requesting that anyone with information come forward.

My PG Now reporter Cole Kelly is currently on scene and will be updating as more information becomes available.