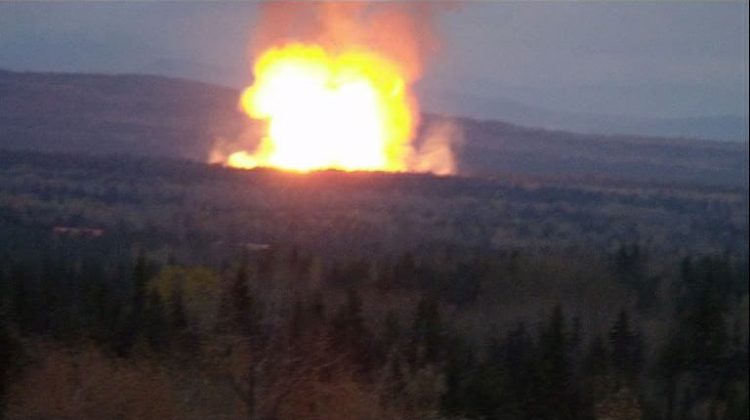 Canada’s Energy Regulator (CER) has issued a $40,000 fine to Westcoast Energy Inc. in relation to an October 2018 pipeline rupture that occurred near Prince George.

The company received the penalty for failing to conduct an in-line inspection of its 36-inch natural gas transmission line within the allowable interval specified by its integrity management program.

The Transportation Safety Board conducted an incident investigation into the rupture and released its report in March of this year.

It indicated the rupture originated at stress corrosion cracks on the outside surface of the pipeline.

Following the rupture, the natural gas being transported was released and ignited.

No injuries were reported but 125 residents within a two-kilometre radius were evacuated.

In February of 2019, the Lheidli T’enneh filed a lawsuit against Enbridge following the pipeline burst.

The host first nation claims inadequate communication and the lack of emergency response from Enbridge were two of the main reasons behind the lawsuit.

Last December, it was announced that the Enbridge West Coast Pipeline is operating at full capacity.

A spokesperson for Enbridge has issued the following statement to MyPGNow.com

Enbridge has paid the administrative monetary penalty issued by the Canada Energy Regulator in relation to the October 9, 2018, Shelley natural gas pipeline incident in full.

We know this incident has caused concerns and disrupted the lives of many people in the area. We have learned from this incident and have taken steps to ensure the safety of our natural gas system.

At Enbridge, no incident is acceptable.

Since the Shelley incident, we’ve completed a comprehensive pipeline integrity program on our natural gas pipeline system in B.C. to prevent similar incidents from occurring and to significantly improve pipeline safety.

This is the most aggressive integrity program ever undertaken by Enbridge on its pipeline system in B.C. It’s part of a new approach to pipeline safety and an ongoing commitment to continually improve the safety of our natural gas pipeline system.