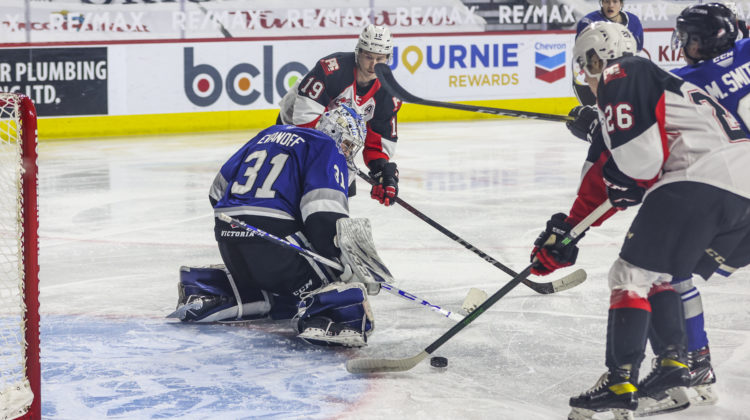 After putting the forward lines into a blender, the Cats regained their offensive stroke on Monday, defeating the Victoria Royals 4-1 from Sandman Centre in Kamloops.

“We really worked hard over the past couple days and after we lost that last game we had meetings to figure it out and we worked on some things and the guys bought in and worked hard.”

“We changed some lines around and that happens all the during the year to change things around and for the players it’s something fresh too and it worked,” said Lamb.

The Cougars jumped out to a 2-0 lead after the first period courtesy of Ethan Browne and Kyren Gronick who solved Royals netminder Adam Evanoff.

“I have been here for four years straight and guys like me have to take control and if I am going then the guys are going,” said Browne.

Gronick leads all rookies in the division with 10 points and continues to draw high praise from his coach.

“He’s been good this whole time. He is one of those glue players and I don’t know if I have said it to you guys (the media) but he’s going to be one of those players where you put him on a line with guys who might be struggling and he can help them get back on track,” mentioned Lamb.

PG kept coming in waves, this time it was Jonny Hooker who notched his sixth of the season from Majid Kaddoura and Koehn Ziemmer.

In the third, Trenrtyn Crane ended Taylor Gauthier’s shutout bid after taking a pass from Carter Dereniwsky, cutting the deficit to 3-1.

At the 7:30 mark of the final period, Craig Armstrong provided the insurance marker accepting a Jack Sander feed and tucking it past Evanoff.

Browne, Gronick, Armstrong and Kaddoura all had two point games against the Royals.

With the win, the Cougars snap a four-game losing skid, improving to 5-7-1-1, leaping past Kelowna for third place in the BC Division.

The Cougars are back in action Wednesday against the Kamloops Blazers (11-2-0-0).

Puck drop is at 7pm from Sandman Centre.

Prior to that, the Blazers will lock horns against the Vancouver Giants tomorrow night (Tuesday).