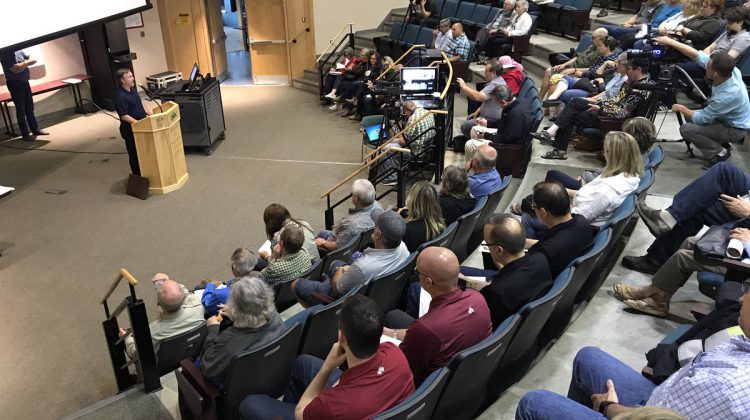 Evacuees hear from the City, organizations on the status of 2017 BC Wildfires in a town hall meeting | Kyle Balzer, My PG Now

Some experiences have been times of hardship for BC wildfire evacuees.

As a result, nearly 100 people came to UNBC’s Canfor Theatre Thursday night, hoping to find some answers about their home, city, and region.

Evacuees being told most #BCWildfires in #Cariboo likely to be active for weeks; some contained, but most info is unknown | #CityOfPG pic.twitter.com/onTuaVMwMW

Montana Joseph was evacuated out of Williams Lake and says while she’s tired of waiting, she appreciates Prince George’s hospitality.

“It’s been okay, but I’d definitely like to go home very soon if possible, and as long as it’s safe of course.”

Don White was ending a four-week vacation in Alaska with friends when the wildfires began to multiply near his hometown of 108 Mile House.

He says he hopes everything is okay as it can possibly be.

“When you haven’t seen your home in four weeks and there’s a fire, you’d hope that you can still get your family stuff like photos and such, but obviously that is what we don’t have. We’ve got a trailer, so we’re staying in there.”

#BCWildfires evacuees ask if they can help; officials say important to stay calm, away from fire, let pros handle the situation | #CityOfPG pic.twitter.com/wMo8Axx1gF

More than 6,000 people have registered in Prince George through the College of New Caledonia (CNC), some as recently as Thursday morning.

Much to his surprise, he was floored by the immediate generosity of the locals.

“I’m amazed at the amount of support they’ve got up here, and I just couldn’t believe the amount of what they have to process. They’re doing an excellent job as far as I’m concerned, and my hats off to everybody in Prince George.”

Poole was also in attendance at UNBC.

Mayor Lyn Hall, who MC’d the evening, says another town hall meeting is expected to take place in the coming days.