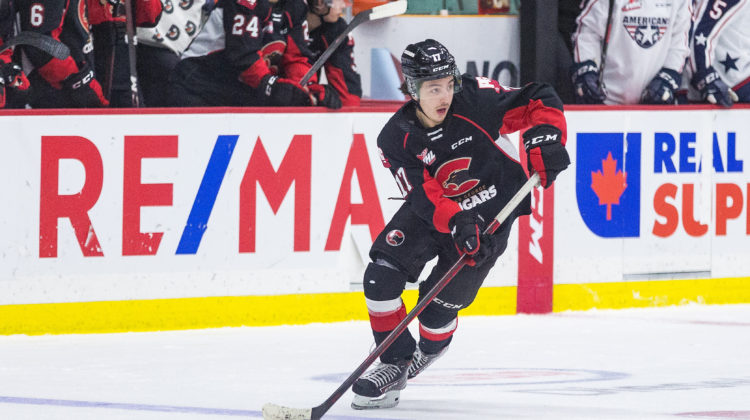 Too little, too late.

The Prince George Cougars learned a hard lesson about time management while playing the Tri-City Americans on Friday at CN Centre.

After falling behind by as many as four-goals, the Cats were unable to get back on even terms, dropping a 4-3 decision in front of 1,813 fans.

“We are not starting on time and we are not playing a full sixty minutes. I don’t know what it is, but I think we are preparing the right way. It’s just that when it comes to game time something is not clicking. We really have to figure that out and when we do, we will be a hell of a team,” said Hudson Thornton, Cougars defenceman.

Despite having to cut through the Okanagan to get to PG, it was the Americans who burst out of the gate like gangbusters.

Samuel Huo’s one-time shot at 7:23 of the first period clipped over the shoulder of Cougars netminder Tyler Brennan for a 1-0 edge.

Five minutes later, a Marc Lajoie point shot found its way through a screened Brennan doubling the Tri-City lead at the end of 20 minutes.

It was an even rockier start to the second for PG as Americans leading scorer Parker Bell drilled home a pass from Connor Bouchard through the wickets of Brennan to extend the lead to three.

The dreadful start continued after a misplay behind the Cougar net ended up on the blade of Jake Sloan who’s quick release went through the five-hole and rippled the back of the cage for a commanding 4-0 lead.

Brennan ended up getting pulled after allowing four goals in 24 shots.

PG finally found its footing offensively on the power-play as a wraparound shot by Jonny Hooker slipped through Tri-City goaltender Nick Avakyan trimming the deficit to three after 40 minutes.

In the third, the Cougars threw everything including the kitchen sink at the Americans goal and did it with some degree of success.

“I think that power-play goal kind of gave us a spark going into the intermission and we just had a chat that we believe in each other and we went on the ice in the third and showed we believed and we just have to find a way to be the team we can be,” added Thornton.

PG got within one on the power-play courtesy of Thornton whose wrist shot blew past the Americans goal.

The Cougars continued to press in the dying success but a series of blocked shots by Tri-City prevented the puck from advancing to the net.

“We were a little flat tonight, the team didn’t come out ready to go and that has been one of the themes this year is not getting off to good starts and getting off track,” said Ethan Samson, Cougars blueliner.

Samson, a Philadelphia Flyers prospect, tallied two helpers and but was also a minus two rating.

Taylor Gauthier stopped all 12 shots he saw in relief for the Cougars.

One more to go!! pic.twitter.com/JYtEAjMQVX