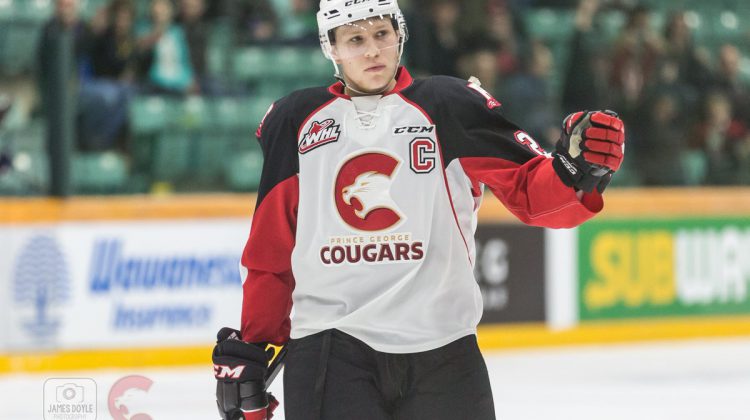 It came down to the final minutes before the WHL’s trade deadline at 2PM on Wednesday, but the Prince George Cougars decided to trade their captain in a blockbuster deal.

Dennis Cholowski was dealt to the Portland Winterhawks for 17-year-old Ilijah Colina, 16-year-old Connor Bowie, and five bantam drafts over the next three years, including a first-rounder in 2020.

The 19-year-old defenceman says it’s bitter-sweet to be leaving the Northern capital.

“There’s some sadness for sure. I got to know all of my teammates, most of the community, and all the fans of course; I had a really great time here. At the end of the day though, you got to play hockey, so I’ll be moving on to Portland and I’m really excited about it.”

Despite only suiting up for a half-season, the Detroit Red Wings prospect believes his stint with the Cats was worth every second.

Cholowski’s highlights with Prince George included 39 points (13G, 26A) in 37 games before the trade, and an invitation to Team Canada’s World Junior selection camp.

General Manager Todd Harkins says trading him was a tough decision for the organization.

“We have a lot of players in the game when you’re dealing with a player of Dennis’ quality. You’re dealing with the NHL team that signed him, you’re dealing with our own team, and then of course, the team we’re trading him to. We’ve been able to do our job here, and his future now is in Portland, and we feel that he’s going to develop there and we’ll be able to say that we developed another player to the NHL.”

He believes Cholowski’s impact on and off the ice will be remembered for years to come.

“In a short time, he opened up a lot of doors for us, he put a lot of smiles on kids faces, and was able to get the fans out of their seats once in awhile. That’s something that we can cherish for the rest of our lives, especially as an organization.”

In total, the Prince George Cougars made six trades within a span of 10 days, which also saw Kody McDonald and Josh Anderson being sent to Prince albert and Swift Current respectively.