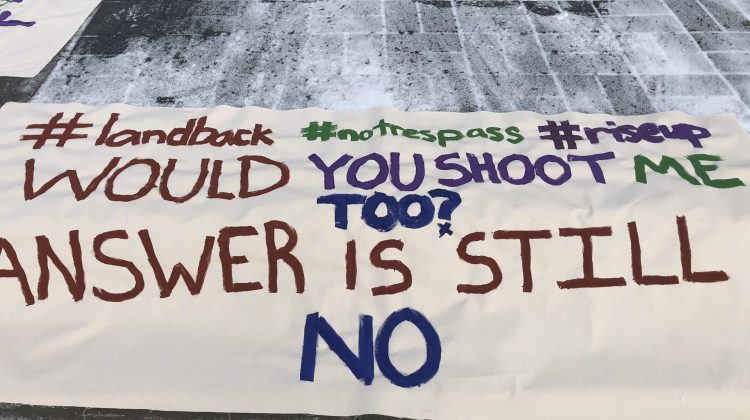 A rally in support of the Wet’suet’en people during their ongoing legal conflict with Coastal GasLink was held in Prince George today (Thursday).

The demonstration was in front of the PG Courthouse, lead by Vincent Wickham, a Wet’suet’en ally,  and Jennifer Pighin of the Gitimt’en clan of the Wet’suet’en nation.

Wickham explained he ‘jumped head-first’ into supporting the cause.

“We are concerned they are flying in a man camp, and that there is going to be an RCMP escort. The RCMP has already taken control of the Morice River Forest Service Road.”

“We are concerned that they are going to bring guns and execute the same kind of violence that they put on us last year. We want Canada and the Government to know everyone is watching, that they can’t screw up this time.”

“There are people within this cause who are fighting so hard and so extreme with everything they’ve got. Sometimes they forget to exercise judgment about the ‘peaceful’ part of the protest. They are afraid of what is going to happen and feel our peaceful protest will not succeed.”

“I think we can continue to act peacefully and those who use such tactics? We will work around them, and we will make sure our voices are heard, and not such extreme actions,” emphasized Wickham.

The rally comes shortly after the one-year anniversary of RCMP raiding the Gitimt’en checkpoint, arresting 14 people, on January 7, 2019.

A screening of the film Invasion produced by the Uni’stoten camp will be held tonight (Thursday) at Prince George’s Omnica Arts Centre at 7 pm.