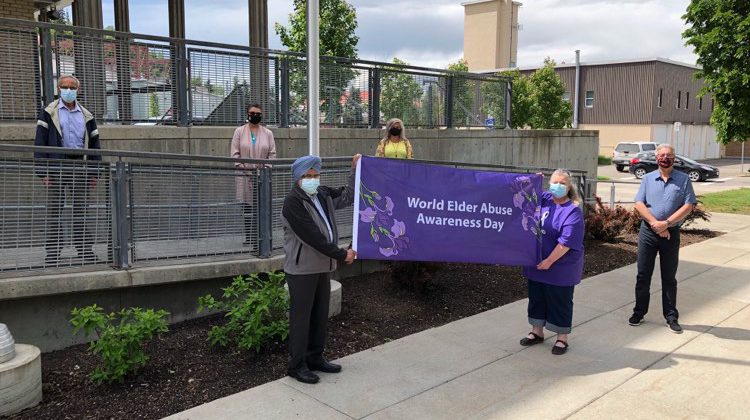 Additionally, a flag was raised yesterday (Monday) in front of city hall to commence the start of World Elder Abuse Awareness Week in front of City Hall.

35 drivers showed up to the Aquatic Centre Parking Lot to begin their parade across town, driving in front of senior care homes and other organizations that help protect Prince George’s elderly population.

Organizations such as the Native Friendship Centre and the Prince George Brain Injury group joined the parade to raise awareness of the issue.

Shelly Le Breton, Community Response Network Coordinator says one of the places drivers passed by is Gateway Lodge, and it’s important seniors in facilities recognize that they haven’t been forgotten about in PG.

“It’s a little bit of a complicated route, but we want to drive by where the seniors are living, and they’re not on the main drag but we felt it was important since there’s still no resource centres opened up, their normal support systems are closed, so we felt it important that they know that we didn’t forget about them. And if they can’t come to us, we can go to them.”

Le Bretton says 1 in 10 seniors experience some form of elder abuse, and it is a somewhat underreported issue.

“Elder abuse is unique in the way that we define it in the way that the people who are the abusers are people the elder trusts, loves and relies on, and they become very vulnerable because of those relationships,” explained Le Breton.

Le Breton says a lot of the abuse goes unchallenged because of the relationship that commonly exists between the abuser and the abused.

“Elder abuse often has to do with finances, so as people age, people feel entitled to their money and it’s usually a loved one or someone that’s been given the power of attorney or something like that,” Le Breton added.

She hopes that one day, the province delegates more resources to protecting seniors, noting that BC works hard to protect domestic violence victims and also has the Ministry of Children and Families to protect children.